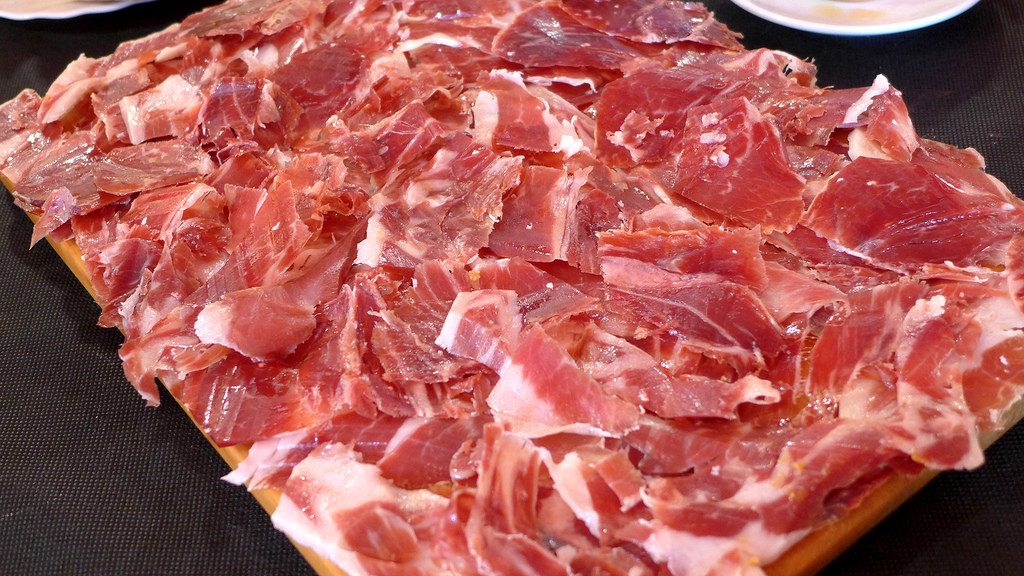 Spanish ham or iberian ham, in Spanish” jamón ibérico”, is a type of ham from the Iberian pig, very appreciated in the cuisine of Spain and Portugal, and often considered as an article of haute cuisine and gastronomic luxury.

For its production Spanish ham must have at least 50% purity of this breed to be called «Iberian ham». Although the highest quality will be 100% Iberian hams from Iberian pigs in which both parents will be of race 100% Iberian. For the rest of the Iberian hams, crosses with the Duroc pig breed are allowed.

The main characteristics that distinguish the Iberian hams in their quality derive from the purity of the breed of the animals, from the breeding in an extensive regime of freedom of the Iberian pig in wooded pastures where they can move widely and perform physical exercise, of the food that follows the pork in the ”montanera” period(period between October and February in which pigs are free in the oak forests), and finally the curing of the ham, which usually extends between 24 and 48 months, needing more healing time the larger the size of the piece and the greater amount of acorns the pig has ingested.

The hams are labelled according to the pigs ‘diet and the percentage of the pigs’ Iberian ancestry, with an acorn diet and pure-bred Iberians being most desirable. The current labelling system, based on a series of color-coded labels, was phased in starting in January 2014.

According to the geographical area of its origin there are four Origin Certified recognized by the European Union of the Jamón ibérico: