“Lomo” is the best and most representative cured sausages elaborated in Spain.” Lomo ibérico” is made with meat of Iberian pig salted, marinated and stuffed in permeable natural or artificial casings and which has suffered an appropriate maturation process.

“Lomo” should be eaten raw, cut into thin slices and served as a” tapa”, and also in a sandwich.

One of the most important characteristics of “Lomo”, at a nutritional level, is its high protein content in relation to its fat. For every 100 grams of “Lomo”, you have 50 grams of protein and only 8 of fat.

Other cured sausages, as “chorizo”, salchichón or “morcón” are made from minced pig meat and seasoned with aromatic herbs and different spices (paprika, pepper, garlic, rosemary, thyme, cloves, ginger, nutmeg, etc.) that is introduced (“stuffed”) in skin of pork guts. The natural casing is the authentic creator of the great taste of natural sausage for its great qualities in the healing of sausages.

As mentioned before, cured sausages are usually served with bread (on toast or sandwich) or if you want to serve several people in a suitable presentation in what is called sausages table. In most cases it is served cold and cut into slices (hence the other English denomination of cold cut). As a rule, it is an appetizer or tapa served before a meal (in this case it is called entrees) or at an informal snack or dinner.

Cured sausages of higher quality are made from Iberian pig, as are those included in this section. 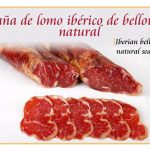 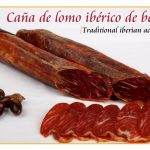 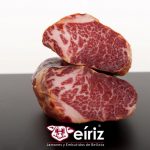 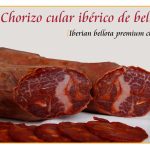 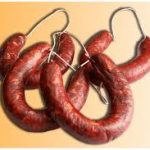 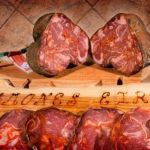 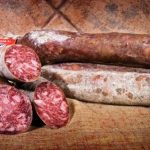