Olive oil is a liquid obtained from olives (the fruit of Olea europaea; family Oleaceae), a traditional tree crop of the Mediterranean area. The oil is produced by pressing whole olives. In Spain, the facilities where the oil is obtained are called “almazara”. Olive oil is fundamentally used in cooking, about 90% of total production, whether for frying or as a salad dressing. It is also used in cosmetics, pharmaceuticals, and soaps, and has additional uses in some religions. The olive is one of three core food plants in Mediterranean cuisine; the other two are wheat and grapes.

The oil is extracted from ripe olives of between six and eight months, just at the moment that they contain their maximum quantity of oil, which usually occurs at the end of autumn. The olives undergo a first pressure in order to extract their juice; The quality of the oil depends to a great extent on the subsequent processing. For this reason, producers monitor these steps with great care. The quality of the olive oil is judged by its organoleptic properties and by its content of free fatty acids. There are regulations in the European Union on the oil classifications in different categories depending on the concentration of free fatty acids.

The acidity of an olive oil is determined by its content of free fatty acids (that is, they are not part of a lipid compound) and is expressed by the grams of oleic acid per 100 g of oil. These grades are not related to the intensity of the flavour, but are a guideline to catalogue the olive oils.

In countries that adhere to the standards of the International Olive Council, as well as in Australia, and under the voluntary United States Department of Agriculture labelling standards in the United States:

Extra virgin olive oil is the highest grade of virgin oil derived by cold mechanical extraction without use of solvents or refining methods. It contains no more than 0.8% free acidity, and is judged to have a superior taste, having some fruitiness and no defined sensory defects. Extra virgin olive oil accounts for less than 10% of oil in many producing countries; the percentage is far higher in the Mediterranean countries (Greece: 80%, Italy: 65%, Spain 50%).

Virgin olive oil is a lesser grade of virgin oil, with free acidity of up to 1.5%, and is judged to have a good taste, but may include some sensory defects.

Refined olive oil is virgin oil that has been refined using charcoal and other chemical and physical filters, methods which do not alter the glyceridic structure. It has a free acidity, expressed as oleic acid, of not more than 0.3 grams per 100 grams (0.3%) and its other characteristics correspond to those fixed for this category in this standard. It is obtained by refining virgin oils to eliminate high acidity or organoleptic defects. Oils labelled as Pure olive oil or Olive oil are primarily refined olive oil, with a small addition of virgin olive oil for taste.

Extra virgin olive oil is very beneficial for health, it is recommended for all ages. Some of the advantages offered by the consumption of olive oil are:

It contains vitamin E: it prevents the oxidation of bad cholesterol LDL, which would lead to the appearance of atherosclerotic or atheromatous plaques, which prevent the correct blood flow through the arterial system. Because of its vitamin E content and its antioxidant effect on the cell membrane, olive oil is especially recommended for children and the elderly.

Polyphenols: have an antioxidant action, prevents cell aging and also the formation of cancer cells.

In diabetics it helps to lower blood sugar levels, so they would need less insulin.

The extra virgin olive oil infiltrates very little in the food, since the chemical variations that take place in the frying are small and slow. In addition, a crust is made on the food that does not let its constituents escape. So, it is the best olive oil to make fried.

It helps hardening the bones, which greatly benefits adults.

It avoids the superabundance of cholesterol and helps the assimilation of fats, since it favours the hepatic synthesis of bile salts.

It reduces the acid in the oesophageal mucosa, slows and regulates the emptying of the stomach to the duodenum, and decreases gastric acidity, which reduces the risk of the appearance of gastric ulcers.

The amount of fatty acids fully satisfies the nutritional requirements. 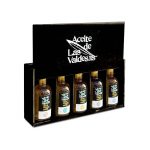 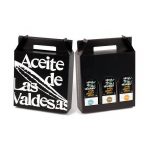 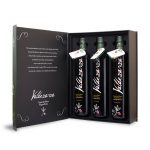 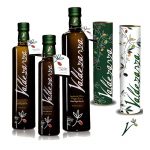 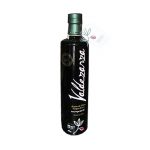 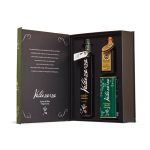